That's it. The Hartland Aikido Club has definitively left our old home at the Bucks Cross Village Hall. I started the club there ten years ago (2011). At one time we had a fairly lively small club but it has become increasingly difficult to attract new students or retain old ones. Any hope I had of revitalizing the club were dashed by the arrival of the pandemic. So today I took away all our mats. We won't be back in Bucks Cross in future.

I don't even know if I will ever practise or teach aikido in future. I began my studies in 1983. I started teaching in the late 80s and ran my own club in London in the 90s. It seems an awful shame not to pass on some of the knowledge I have gained to a new generation of students. But I have to be practical. I can see no way to restart the club now.

If, on the other hand, any other martial arts clubs are interested in studying aikido, by all means contact me. It may be possible for me to teach as a guest at your club.

For now, though, the Hartland Aikido Club is no more.

Posted by Huw Collingbourne at 12:28 4 comments:

Ironically, I've had enquiries from several people wanting to start or resume learning aikido during the past few months. Normally, I'd be delighted. In the present circumstances, however, I have to turn them away. Due to the ongoing pandemic there has been no aikido for most of this year and I honestly can't see any prospect or running an aikido class any time this year - or maybe next year? If I have any more news, I'll post it here. But sadly, the news at the moment is all negative.

Posted by Huw Collingbourne at 02:25 No comments:

I had hoped to start running some classes again this spring. However, the current situation makes this impossible. For the foreseeable future, therefore, there will be no aikido classes at Bucks Cross. I hope we can resume again once the present emergency is behind us.
Posted by Huw Collingbourne at 09:34 1 comment:

Let me teach you aikido!

I’ve studied aikido since 1983 and taught aikido since the early ‘90s. My main teacher for many years was a direct student of Koichi Tohei Sensei (10th dan) and I have also practised with Tohei Sensei. I have run aikido clubs in London and North Devon and for the last eight years I have studied the Iwama Aikido weapons system in the tradition of Saito Sensei. I would love to help other people discover the beauty and power of aikido but the plain fact of the matter is that my small club in Bucks Cross, North Devon, is rather remote and does not attract students. This year, therefore, I have decided to stop teaching on a weekly basis at the Bucks Cross Club.

However, I would be pleased to teach at any martial arts club that might be interested in discovering the principles of aikido. It doesn’t matter if the club already studies aikido (in any style) or some other martial art. If you are open to learning a few of the things I have to teach, please let me know.

If you want to book the Bucks Cross hall for private or group lessons, please contact me. I will be very happy to do that too. Or if you know of some venue in North Devon or Cornwall that might like to host an aikido club, let me know. Let’s talk about it.

For the record, even though I have studied and taught aikido for nearly forty years, I hold the fairly lowly grade of 2nd dan. I was last graded in 1992 by Sensei David Currie of the British Ki Aikido Association (BKAA). When I moved away from London, I stopped practising with Sensei Currie who subsequently moved to the USA. I later left the BKAA (without Sensei Currie I felt the organisation had little to offer me) and became an independent teacher. Over the years, various people have suggested that I adopt a higher grade or join an organisation that would award me a higher grade. I have always rejected that. A higher grade does not automatically make a teacher any better at aikido. I respected my teacher, Sensei Currie, and I made a conscious decision to remain with the grade he awarded me in 1992. I realise that some clubs do not like being taught be relatively low grades, however, so I want to be quite clear that I have a lower formal grading than most other club senseis in the UK today. Even so, I hope I may have acquired a few skills over the last few decades that you might find of interest…

Posted by Huw Collingbourne at 07:33 No comments: 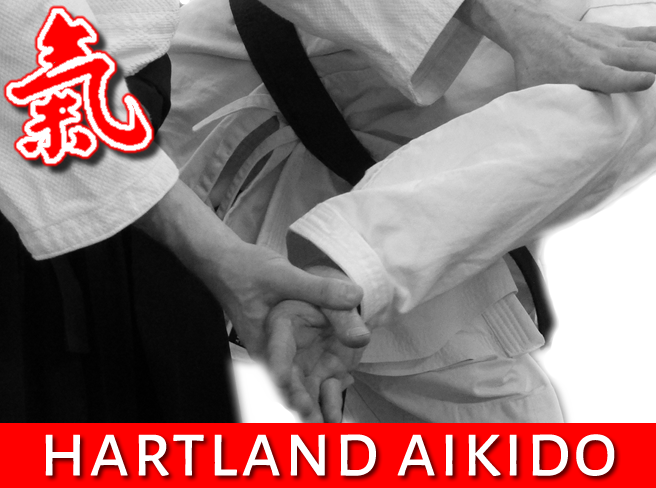 Whether you fancy learning a martial art or just want a fun way of getting fit, Aikido may be the answer. Don’t worry that it’s violent (it isn’t) or that you are too old or unfit (you aren’t). In fact, if you think martial arts are all about punching, kicking and competitions, you might be surprised to know that there are no punches and kicks in Aikido. We don’t have competitions either!

Aikido teaches the power of relaxation for self-defence. It can be as soft and gentle or as dynamic and vigorous as the individual student wants to make it. Aikido is suitable for both men and women and there is no upper age limit.

Huw Collingbourne, the teacher at the club in Bucks Cross, started learning Aikido in the early 1980s and ran an Aikido club in London in the 1990s. For the last eight years he has been teaching in North Devon. If you’d like to try Aikido, come along to the classes on Thursday 6th or 13th of February (7:30 to 9:30) at the Bucks Cross Village Hall (between Bideford and Hartland) to try a free lesson. The classes are for adults (18+). Go on, give it a go!
Posted by Huw Collingbourne at 03:35 No comments:

Please note that we will no longer have weekly Thursday classes in 2020. If you want to learn aikido, please contact me. I will only teach when I have a firm booking for a lesson. If you give me advance warning, I may be able to book the hall on various different days.
Posted by Huw Collingbourne at 04:32 No comments:

The Hartland Aikido Club is taking a break during December. I'll post news when we start back again in 2020.
Posted by Huw Collingbourne at 01:45 No comments: