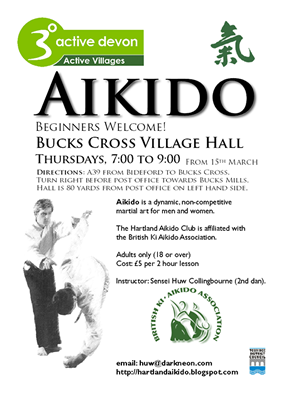 I'm pleased to say that I can finally announce the start date for the Hartland Aikido Club. The venue will be the Bucks Cross Village Hall, between Bideford and Hartland, and the first lesson will be on March 15th this year (2012). Thereafter, we'll be practising regularly on Thursdays between 7 o'clock and 9 o'clock. Directions can be found HERE.

If you've never practised Aikido before, let me give you an idea of what to expect. Aikido is a Japanese martial art that emphasises the power of relaxation. So while you will learn practical self-defence techniques, you will also learn how to remain calm under pressure - something that you may find useful in daily life.

Our Aikido Club aims to be a welcoming and friendly place for both women and men to practise.

Aikido is an enjoyable art and you can practise Aikido even if you are not in the first flush of youth! If you have any worries about practising, or if you have any specific medical problems that might prevent you practising certain techniques, please just have a word with the instructor (that's me) at the start of the class. Almost always it is possible to find ways of practising Aikido even if you are not 100% fit. If, on the other hand, you are looking for a vigorous, active activity, Aikido provides that too.

We are incredibly lucky to be able to run our Aikido Club in one of the most beautiful parts of Britain. If you do Aikido elsewhere in the UK and you want to visit our club, we'd be delighted to see you. If you need more information, use the Contact form to send me an email.

If you live locally, please help us spread the word about our new club. Perhaps you could display a small poster in a window or on a noticeboard (similar to the one shown above)? If so, let me know and I'll email you a file which you can print out on A4 paper.

Remember, we start at 7 o'clock on Thursday, March 15th. The lessons are suitable for beginners. Just be sure to wear something loose-fitting and comfortable (such as a tracksuit) and please wear slippers or sandals so that you can leave them at the side of the mat during the lesson.

I look forward to seeing you there!
Posted by Huw Collingbourne at 11:13 No comments:


This is an edited version of an article which I wrote some years ago for ‘Legal Business’ magazine.

Strange as it may seem, Aikido is a fighting system in which the overriding aim of its practitioners is to avoid getting into a fight. Even so, Aikido is a highly spectacular martial art. Its explosively powerful throws could have been custom-made to emphasise the prowess of the typical muscle-bound Hollywood hero. What is more interesting, to the less naturally heroic amongst us, is that these throws are every bit as powerful when executed by somebody of more mundane proportions. 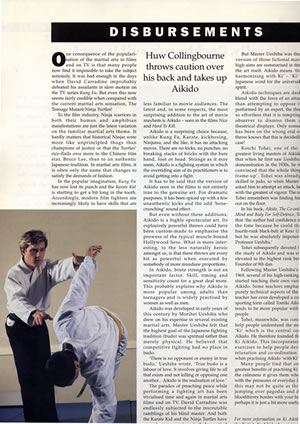 In Aikido, brute strength is not an important factor. Skill, timing and sensitivity count for a great deal more. This probably explains why Aikido is more popular among adults than teenagers and is widely practised by women as well as men.

Aikido was developed in early years of this century by Morihei Ueshiba who drew on his expertise in several existing martial arts. Master Ueshiba felt that the highest goal of the Japanese fighting tradition (budo) was spiritual rather than merely physical. He believed that competitive fighting had no place in budo.

‘There is no opponent or enemy in true budo,’ Ueshiba wrote, ‘True budo is a labour of love. It involves giving life to all that exists and not killing or opposing one another... Aikido is the realisation of love.’

The paradox of preaching peace while performing a fighting art has been trivialised time and again in martial arts films and on TV. David Carradine was endlessly subjected to the inscrutable ramblings of his blind master in the old TV Kung Fu series. And both the Karate Kid and the Ninja Turtles have peace-loving sages in a similarly mystical tradition. But Master Ueshiba was the real-life version of those fictional masters. His high aims are summarised in the name of the art itself. Aikido means ‘the way of harmonising with Ki’ — ‘Ki’ being a Japanese word for the universal creative spirit.

Aikido techniques are designed to blend with the force of an attack rather than attempting to oppose it. When performed by an expert, the throws look so effortless that it is tempting for the observer to dismiss them as mere theatrical displays. Only someone who has been on the wrong end of such a throw knows that this is decidedly not the case!

The late Koichi Tohei, one of the greatest masters of Aikido, recalled that when he first saw Ueshiba doing a demonstration in the 1930s, he was quite convinced that the whole thing was ‘a frame-up’. Tohei was already highly skilled in judo, so when Master Ueshiba asked him to attempt an attack, he obliged with the greatest of vigour. The next thing Tohei remembers was finding himself flat out on the floor.

In his book, Aikido, The Co-ordination of Mind and Body For Self-Defence, Tohei says that ‘the author had confidence in Judo at the time because he could throw any fourth-rank black-belt at Keio University, but he was absolutely impotent against Professor Ueshiba.’ Tohei subsequently devoted his life to the study of Aikido.

Following Master Ueshiba’s death in 1969, several of his high-ranking students started teaching their own variations of Aikido. Some teachers emphasised the purely technical aspects of the art. One teacher has even developed a competitive sporting form called Tomiki Aikido which tends to be more popular with younger people.

Tohei, meanwhile, was concerned to help people understand the meaning of ‘Ki’ which is the central concern of Aikido. He therefore founded the style of Ki Aikido, which is the style practised at the Hartland Aikido Club. Ki Aikido  incorporates various exercises to help people develop the relaxation and co-ordination required when practising Aikido ‘with Ki’.

Many people find that one of the greatest benefits of practising Ki Aikido is the calmness it gives them when coping with the pressures of everyday life. While this may not be quite as thrilling as jumping over pagodas and defeating bloodthirsty hordes with your bare hands, perhaps it is, for most people most of the time. just a bit more useful.

Posted by Huw Collingbourne at 10:36 No comments: