Just a reminder that if you live in the North-west of Devon, you have some great opportunities to learn the beautiful art of Aikido. All skill levels (from complete beginner to expert) are welcome. And if you already practise with some other Aikido club, please don't let that stop you. We place no barriers based on an 'approved style' of Aikido.

Anyway, you can join us at the following classes:

I hope to meet some of you during the coming year!
Posted by Huw Collingbourne at 10:43 No comments:

To do aikido well you need to be arrogant. What? Really? Surely not!

I promise you, I mean it. In order to do aikido well you need to act with total confidence. A confidence that your aikido skills are so magnificent, so unassailably wonderful that they absolutely cannot fail. A confidence so mind-bogglingly vast that it really does amount to arrogance.

Now, I’ll be the first to admit that this might be misplaced confidence. Just because you believe your technique cannot fail does not mean that it will not fail. But nevertheless in the moment when you do that technique you must be completely and utterly certain that it will succeed. Only with this absolute confidence can acquire the quality, the softness and the fluidity that makes for really good aikido. If for one split second you doubt that you will succeed, you will surely put in some unneeded effort, add an extra little bit of strength, or fall back on the crutch of basic technique.

Let me give you an example of what I mean.

Years ago I was lucky enough to see the great operatic tenor Nicolai Gedda give a solo recital at Covent Garden in London. The opera house was packed, all eyes and ears were focussed on the very unremarkable-looking man who had just walked on stage. I remember thinking that Gedda looked like someone to whom you wouldn’t give a second glance if you saw them in the street. He looked rather small and, well, ordinary. He stood next to the piano and seemed to shuffle his feet as though he had no idea what he was doing there. Or, if he did, then he was perhaps too nervous to sing… and when he opened his mouth, what would come out? A tuneless croak perhaps?

And then the piano played the notes introducing the first aria and, in those moments, Gedda grew visibly. He actually seemed to expand, to become taller. Suddenly he was clearly filled with complete confidence. Before our eyes he had transformed from a nonentity into a great operatic tenor. Even before he opened his mouth, we could see that he was going to sing magnificently. And, of course, he did.

Nicolai Gedda – flawless technique, of course - but his greatness lay in his ability to transcend technique. He was not an especially striking-looking man when not singing but as soon as he opened his mouth he was utterly transformed.

I feel sure that Gedda in those moments prior to singing had become filled with precisely the sense of confidence – of arrogance – that I am talking about. If he had for a moment doubted his ability to sing that aria he would have struggled, put in effort where effort was not needed, reverted to basic technique rather than sing from his soul and his heart.

And that is what I mean by arrogance in aikido. Once you have studied long enough to have mastered the basic techniques you have to let go of them. They were once a help but now they are a hindrance. What you should now be looking for is quality – fluidity, harmony, blending, softness. But if you are worried about failing, you will be too focussed on using technique to ensure success. And when you focus on technique alone, you will not be fluid, you will not be in harmony, you cannot really blend. And worst of all, you will be tempted to use strength rather than softness.

And so it is my strong belief that an experienced practitioner of aikido needs to internalise a sense of absolute confidence – yes, arrogance – a certainty that the technique will work because we already know that technically we can make it work and now we need to find an ever greater quality to make it work more truly in accordance with the principles of aikido.

But what if it doesn’t work?

Then we need the humility to admit it. The arrogance only needs to be there for those moments when you need total self-confidence in order to avoid spoiling your aikido by struggling to make it work at all costs. But if you fail even so, well, that’s all a part of the learning process. Very few of us can realistically expect to achieve in aikido what Nicolai Gedda achieved in operatic singing. Think of it this way: we can be simultaneously arrogant in our belief in the power and beauty of the art of aikido and humble in our knowledge that we have a long way to travel in trying to master that art.

Posted by Huw Collingbourne at 03:40 No comments:

Email ThisBlogThis!Share to TwitterShare to FacebookShare to Pinterest
Labels: opinion

It's the time of year for making a New Year's resolution. If you want to get fit, improve your posture and learn calmness of mind, Richard Small's new exercise class in Bideford may be exactly what you need. Based on the principles of Aikido, Tai Chi and Yoga, this will teach you gentle exercises to improve your mental and physical well-being. These classes are suitable for all ages and levels of fitness.

This new hour-long class begins on Wednesday the 17th of January between 6:00 and 7:00 in the evening. The poster below gives more information - or go to Richard's web site for all the latest news: https://aikijo.weebly.com/ 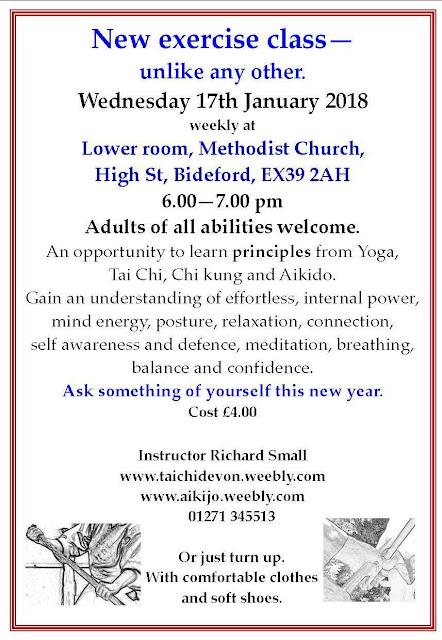 Meanwhile, if you want to learn Aikido (which includes exercises for mind and body in addition to techniques of self-defence), our regular Thursday classes continue in Bucks Cross Village Hall (7:30 to 9:30) and Friday classes continue in Holsworthy Leisure Centre (7:30 to 9:00). Whether you are new to Aikido or an old hand, you are most welcome to come and join us. If you have previously studied (or even if you are still studying) at some other Aikido class or in another style, don't worry. We are happy to practise with everyone, no matter what style or level of experience.

In addition, Richard Small also has a class teaching aiki-weapons (the Iwama Aikido weapons system) on Wednesday evenings in Bideford between 7:00 and 9:00.