Last week's jo dori class at the Hartland Club was hugely enjoyable and very instructive. It was taught by Sensei Richard Small, our chief weapons instructor, who also teaches Iwama-style weapons at his own class each Wednesday in Bideford.

These are a couple of  the techniques that we practised... 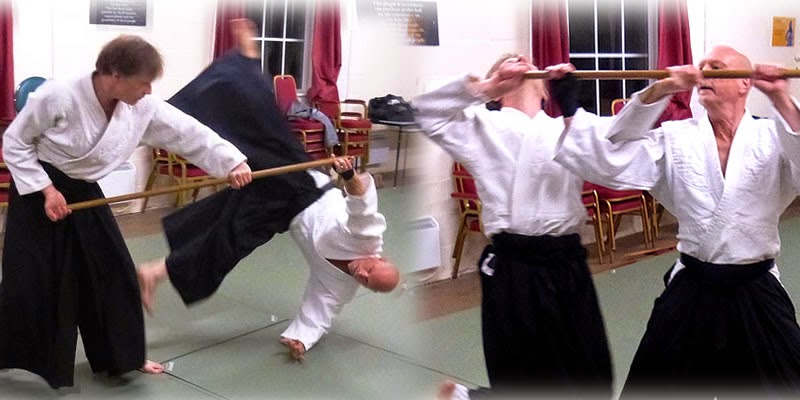 And here is a group photo. 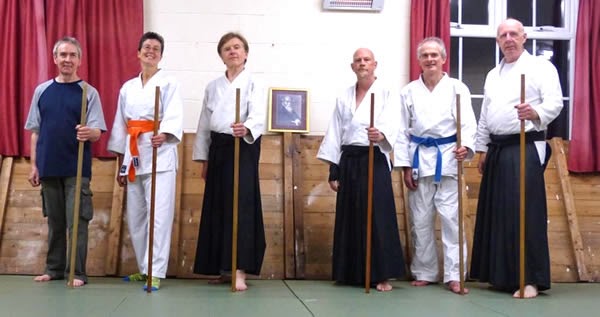 If you want to learn more about Aikido weapons (and freehand techniques), you will be very welcome to join us at the Hartland Club or in Sensei Small's Bideford Club. What are you waiting for..?


Posted by Huw Collingbourne at 06:09 No comments:

Shoji Nishio Sensei - if you don't know him, you should!

Aikido Journal has a wonderful, in-depth course taught by Nishio Sensei. If you are interested in extending your Aikido knowledge, this course is worth every penny. Nishio Sensei was a marvellously skilful teacher who specialised in blending weapons practice with open-handed technique. You can read more about Nishio Sensei HERE and you can subscribe to the Aikido Journal course HERE. Meantime, here is a short taster.

Posted by Huw Collingbourne at 07:34 No comments:

Email ThisBlogThis!Share to TwitterShare to FacebookShare to Pinterest
Labels: nishio

How to tie a belt for Aikido (or other martial arts)

New students (and some not so new students too) often have problems figuring out how to tie their belts. I just discovered this useful tutorial which should help to clarify the technique needed....

Posted by Huw Collingbourne at 07:07 No comments:

Email ThisBlogThis!Share to TwitterShare to FacebookShare to Pinterest
Labels: video

Just a reminder that there is no Aikido class on Monday (10th of November). However, Sensei Richard Small will be with us on Tuesday the 11th to teach a weapons class - start time, as usual, is 7:30. If you have a jo and boken, please bring them. If not, we also have a few spares available.
Posted by Huw Collingbourne at 13:30 No comments:

What is the ‘true’ path of Aikido? Did O-Sensei define all of Aikido from A to Z for all time? If that is the case, are we wrong to practise techniques in ways that were not precisely defined by O-Sensei?

I know that many people feel that only by performing each technique in a precisely defined manner are we being ‘true’ to Aikido. But there is an alternative point of view which sees the practice of Aikido as a process of constant discovery: since no person and no attack can ever be quite the same as any other person or any other attack, each defence may change subtly in response to (or ‘in harmony with’) each attack. While both arguments have merit I must admit that personally I feel more inclined towards the latter point of view. But am I right? After all, by allowing techniques to change don’t we risk straying away from the heart of Aikido and just ‘making it up as we go along’?

Some Aikido masters have indeed voiced concern about the potentially damaging effect of making changes to Aikido. This concern was powerfully expressed by Michio Hikitsuchi Sensei (10th dan)  who said in an interview with Aikido Journal: “I must simply convey to the world exactly what I learned from O-Sensei. That is my responsibility. So, I must say only what O-Sensei said and teach only what O-Sensei taught. Nothing else. I must not inject my own opinion or in any way distort the direct transmission of O-Sensei’s Way.”

Morihiro Saito Sensei was equally concerned with maintaining the true transmission of the techniques taught to him by O-Sensei. This is how Saito explained himself in an interview with Gaku Homma: “I feel it is my obligation to teach the Founder’s Aikido to as many students as possible. When I die, a direct link to his technique will disappear. I have been given the gift of 23 years of experience with the Founder…What I have learned, I have learned from him, and what I have learned, I feel compelled to teach. “

Should we not then accept the views of these two great masters?  They considered it important to transmit faithfully the unmodified practice of Aikido just as they were taught it by the Founder. So are we to regard it as fundamentally wrong, decadent even, to introduce any changes to that purest form of our art?

But let’s consider an alternative viewpoint. In his book ‘Aikido Yurusu Budo’ (available from http://store.Aikidojournal.com/), the great master Shoji Nishio argues that we should not be afraid of the idea of Aikido changing and evolving over time. On the contrary, he says that “Budo techniques are not permanent and unchanging; if other things change, then naturally budo change in response. What does not change, of course, is the spirit of Aikido as it was taught by the Founder.”

This reminded me of a story Koichi Tohei Sensei tells in his book “Ki In Daily Life”. One of his students, a man who had only recently been graded to 1st dan, had moved to the island of Guam. At that time there was no Aikido club on Guam and he asked Tohei Sensei how he would be able to continue his training. Tohei told him that if there was no teacher on Guam, the 1st dan must become the teacher. The man felt he was too inexperienced to do so but Tohei persuaded him that even though he only held the rank of 1st dan, he understood the guiding principles of Aikido and that was sufficient. In other words, Tohei was saying that the principles are more important than the precisely defined form.

Nishio Sensei says this in his book: “Before the Founder passed away thirty-four years ago he told us, ‘This old man has brought [Aikido] this far; all of you must take it from here.’ In light of these words, I think it is insufficient – unforgivable, in fact – for us to simply maintain the status quo.’”

Mitsugi Saotome Sensei in his book, ‘Principles Of Aikido’ http://www.amazon.co.uk/Principles-Aikido-Mitsugi-Saotome/dp/0877734097 expresses a similar idea; “I worry about the conflicts that I see arise between different styles and schools of Aikido,” he says, “People fight about which school is right, which one really represents O Sensei’s teaching. Some of these schools try to be claiming Aikido as if it were a brand name. This seems so unnecessary to me. No one can be an exact replica of O Sensei. Likewise, later generations of Aikido students cannot be identical copies of their teachers.”

Saotome argues that technical details do not mark out true Aikido. “If the principle and purpose are present,” he says, “any technique can be Aikido. If they are absent, so is Aikido.” He expands upon this idea in the book’s introduction: “No style – no particular set of forms – is, in and of itself, Aikido. You might think of Aikido as a language. As such it has its grammar and its rules, but that grammar is very broad and accommodating. Like language, it has room for an infinite variety of creative uses of its elements and great elasticity of structure.”

So what are we to make of this? Who is right: those who attempt to practise the techniques as closely as possible to the way they were taught by the Founder? Or those accept the principles but allow themselves great freedom in changing and developing the techniques?

In my view, this apparent conflict of ideas is false. It is simply the case that some people find it more satisfactory – more personally fulfilling – to practise and perfect what they might regard as the ‘canonical form’ of Aikido while others find equal fulfilment in experimentation, adaptation and evolution. And as Aikido is, for each practitioner, a personal journey, what is right for one person may by no means by right for all others.

I’ll give the final words to Saito Sensei (once again from his interview with Gaku Homma): “I would never say that Iwama-style Aikido is the only valid form of Aikido. Each instructor has his or her own individual character that is built on his or her cultural background and environment. It is only natural that different styles and different organizations have developed. Traveling all over the world has helped me to understand this, as I have come in contact with many different people, places, and cultures. I think it is good for students to learn from many different instructors and to practice at many different dojos.”

Posted by Huw Collingbourne at 08:04 No comments: