This month – The Sherlock Holmes School of Self-defence!

If you happen to live in North Devon, you can grab a printed copy of the local Bideford magazine, The Bideford Buzz, at a variety of locations. If not, you can download a PDF copy here: http://bidefordbuzz.org.uk/print-copies/. In July I began writing a monthly column which has a fairly freewheeling ‘martial arts’ theme. Of course, since I am an Aikido teacher, you won’t be surprised to know that Aikido is likely to be one of my main topics of discussion. However, this month (August, 2012) I’ve branched out a bit by taking a look at Bartitsu? 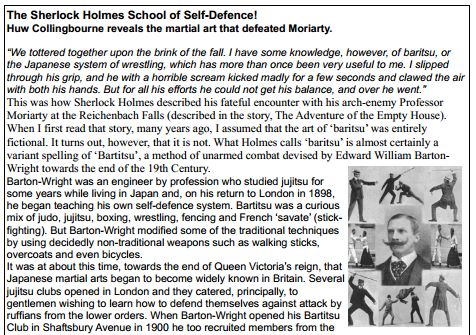 If you are a fan of Sherlock Holmes you may have come across the name minus the first ‘t’. In The Adventure of the Empty House, Holmes says: “I have some knowledge, however, of baritsu, or the Japanese system of wrestling, which has more than once been very useful to me.”

Contrary to what you may have thought, Bar(t)itsu was not an invention of Conan Doyle’s fertile imagination. It was a real fighting art which was taught to gentlemen in London. These days there are even some Bartitsu clubs and associations that attempt to revive the art (see, for example, http://www.bartitsu.org/). I can’t promise that we’ll be doing any authentic Bartitsu in our Aikido Club in Bucks Cross. Even so, I must admit that I am tempted to encourage students to dress somewhat more elegantly. Never mind those wrinkly white gis. Possibly a smart blazer, straw boater and silver-topped cane might add a touch of class to the proceedings…?
Posted by Huw Collingbourne at 04:39

Email ThisBlogThis!Share to TwitterShare to FacebookShare to Pinterest
Labels: bartitsu