Aikido and the Decline of the Martial Arts 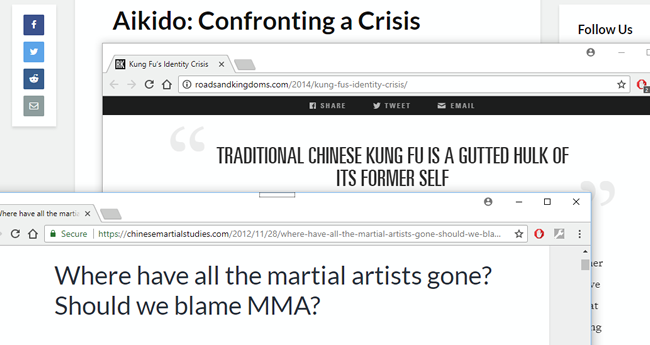 It is increasingly difficult to attract new students to the study of aikido. Out here in the wilds of North Devon we face the additional problem of a relatively small local population spread out over a large area.  But even dojos located in big towns often struggle. The Aikido Journal conducted a global survey among aikido teacher a few months ago and found that, on average there is a ratio of student to teacher of 1.5-to-1 – yes, really. That means that there are almost as many teachers as there are students! ( See: ‘Aikido: Confronting A Crisis’)

Why is this? When I began aikido, in the early ‘80s, it was a fast-growing martial art. How has it entered such a sharp decline over such a short period?

George Ledyard Sensei (7th dan) argues that “MMA, or mixed martial arts, dominates the martial arts scene. Brazilian jiu-jitsu is its tamer and healthier cousin. Young men these days do not seem interested in the more traditional martial arts. They want to fight. And, of course, it is impossible for any of us to compete with the fact that MMA is shown on prime-time cable seven days a week.” (See: ‘Aikido: An Aging Art and its Future’).

But it’s not just aikido. I’ve heard from teachers of other ‘traditional’ martial arts that they too are seeing a sharp decline in interest from potential new students. This Chinese Martial Arts site says:


“Traditional Chinese kung fu is a gutted hulk of its former self. While masters struggle to market their increasingly diluted styles, prospective students are being lured away by mixed martial arts (MMA), a combat sport that is exploding in popularity across the world. As a result, few fighters think of kung fu as a legitimate martial art.”

Another Chinese Martial Art site  used Google Trends to try to determine public interest in various arts over the last decade or so.


“Judo saw massive declines in popularity in the 1980s, and apparently that trend continues into the present decade.  Aikido showed perhaps the most dramatic declines in searches,” and “there has been a marked decline in the number of people searching for information about Tae Kwon Do on the internet over the last decade.

“It should come as no surprise to anyone that the biggest winner over the last decade is the Mixed Martial Arts (MMA) as promoted through the Ultimate Fighting Champions (UFC).  The rising popularity of this sport, both as a form of entertainment and as a distinct style of actual combat training, has been a shock to the American martial arts community.  There is absolutely no doubt that many of the young adults that in a prior generation would have been the backbone of a Judo club or a Karate Dojo are now lifting weights and working the heavy bag at their local MMA gym.”

My feeling is that the rise in public exposure to MMA is particularly bad for Aikido. MMA is competitive. Aikido has no competitions. MMA fighters use strength and aggression. In Aikido we deliberately avoid using strength and emphasise calmness at all times. MMA goes on the attack. Aikido is defensive only. In MMA winning is the end goal. In Aikido, the quality and elegance of technique are valued above the ‘mere’ defeating of an opponent.  It is not easy to explain this to someone whose only exposure to martials arts comes from MMA!


Before people choose a martial art, they must have some idea of what a martial art is.  Back in the 1970s, the Kung Fu TV series emphasised that the true master followed a philosophy of life. He didn’t simply fight. This is a typical example:

In the 1980s film, The Karate Kid, the philosophy of the martial art also played an important part…


Occasionally, even today, the idea of the philosophy at the heart of the martial arts still makes it into popular TV shows.  Google Searches for “Aikido” blipped upward when aikido featured in The Walking Dead TV series.  And Amazon’s science fiction series, The Man In The High Castle, also features some aikido and this account of its core philosophy…


But, sadly, these modern examples are few and far between.  So for most people, most of the time, the idea of a martial artist is a man fighting another man in a cage. That is so far away from aikido that anyone who is looking for MMA would very likely have a big problem even understanding what aikido is about. No competitions, no aggression, no strength…

Can aikido (and other traditional martial arts) recover from this decline? In the short term, I think probably not. In the long term, yes, I believe absolutely they can and will. Why? Because they have a power, logic, elegance and philosophy which has not only stood the test of time but which continues to fascinate and intrigue generation after generation of people.

But, for the time being, we simply have to acknowledge that aikido is unfashionable. We can only hope that something will arise to help explain to the general public, the philosophical underpinnings of the traditional arts. Not everyone wants to fight competitively. The problem with the popularity of MMA is two-fold for aikido. 1) Those people who want to fight don’t appreciate aikido as a non-competitive, non-violent art, and 2) Those people who don’t want to fight think that aikido, being a ‘martial art’ must be aggressive and violent.

Once upon a time, the seeming paradox of a martial art that is peaceful was the thing that most attracted students. It can still attract students. We just have to work harder at getting the message across to them. How we do that, however, is a problem to which I don’t have an answer.

Posted by Huw Collingbourne at 04:33

Email ThisBlogThis!Share to TwitterShare to FacebookShare to Pinterest
Labels: opinion